A femoral hernia is an uncommon type of hernia.

Femoral hernias sometimes appear as a painful lump in the inner upper part of the thigh or groin. The lump can often be pushed back in or disappears when you lie down. Coughing or straining may make the lump appear.

WHAT CAUSES A FEMORAL HERNIA?

A femoral hernia usually occurs when fatty tissue or a part of your bowel pokes through into your groin at the top of your inner thigh. It pushes through a weak spot in the surrounding muscle wall (abdominal wall) into an area called the femoral canal.

Unlike inguinal hernias, femoral hernias occur far more frequently in women, particularly older women. This is because of the wider shape of the female pelvis. Femoral hernias are rare in children.

Femoral hernias can sometimes appear suddenly because of strain on the tummy, such as:

They’ve also been linked to obesity and having a persistent, heavy cough.

WHEN IS SURGERY NEEDED?

Femoral hernias can be repaired using surgery to push the bulge back into place and strengthen the weakness in the wall of the tummy.

Unlike some other types of hernia, treatment of femoral hernias is almost always recommended straight away because there’s a higher risk of complications developing in these cases. Complications that can develop as a result of a femoral hernia include:

Surgery gets rid of the hernia and prevents any serious complications, although there’s a chance of it returning after the operation.

WHAT HAPPENS DURING SURGERY?

There are 2 ways an inguinal hernia repair can be performed:

There are advantages and disadvantages to both methods. The type of surgery you have depends on which method suits you and your surgeon’s recommendation.

You should be able to go home the same day or the day after surgery. It’s important to follow the hospital’s instructions on how to look after yourself. This includes eating a good diet to avoid constipation, caring for the wound, and not straining yourself too soon. Most people make a full recovery from femoral hernia repair within 6 weeks, although many people can return to driving, work and light activities within 2 weeks. 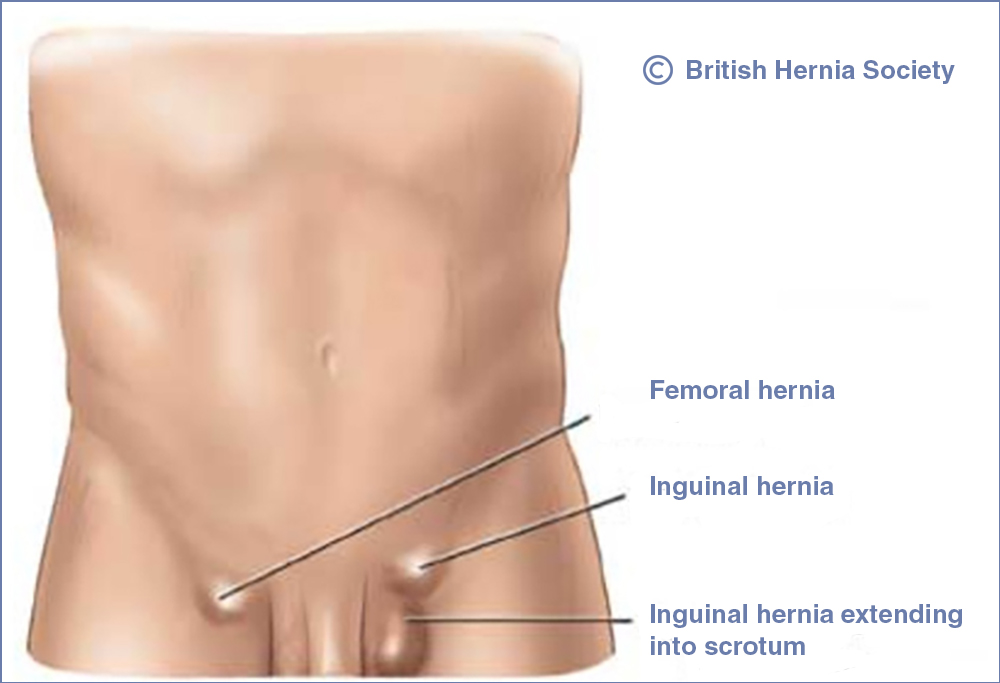